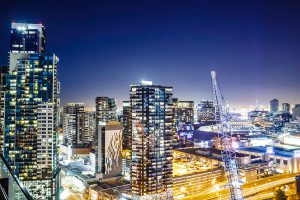 In the life of any successful company, there comes a time to expand IT infrastructure to accommodate increased demand. In 2017, companies that once would have chosen to build on-premises are looking for alternative solutions as they outgrow their existing data centers.

For all but the largest of companies — those that need to house tens of thousands of servers in multiple locations — it rarely makes economic sense to build an in-house data center. Companies that specialize in building and managing data centers can do it cheaper, more securely, and more reliably.

IT departments are responsible for making the most efficient use of infrastructure investments. Whatever the size of a company and its IT budgets, demand always puts budgets under pressure, so it’s important for CIOs and IT professionals to make infrastructure choices that maximize the ROI of every dollar spent on IT infrastructure.

Once CIOs look beyond on-prem data centers, infrastructure can be categorized in any number ways, but for companies looking to augment or replace existing facilities, colocation or public cloud are the most pertinent options.

It’s important to understand that there’s little you can do on a cloud platform that can’t be done with colocated hardware and vice versa. Virtualization provides a certain flexibility and agility on cloud platforms. Colocation has the edge where control and performance are concerned. But each provides flexible and functional server hosting.

At issue isn’t a battle between cloud and colo, but the necessity to have the information you need to choose the best server hosting solution for your particular use case.

Colocation users buy and manage their own hardware, but house it in a third-party data center, sharing the cost of the data center with other companies using the same facility. The data center provides redundant network connectivity, power, security, and space for servers.

Colocation is the closest infrastructure hosting modality to traditional first-party data centers. Colocation users have ownership and complete control over their hardware. They manage and maintain the servers. Only they have access to data stored on their servers.

For most long-term workloads, investing up-front in server hardware and colocating it in a world-class data center is more cost effective than public cloud infrastructure. If maximizing infrastructure ROI is your company’s primary concern, then colocation is almost certainly the best option.

If your company is an early-stage startup there’s something to be said for the on-demand pricing and “zero capital investment” approach enabled by the public cloud. If a business might not exist in six months, large investments in server hardware are difficult to justify.

But for established companies of all sizes with a well-understood infrastructure demand profile, the purported benefits of on-demand pricing are practically non-existent — especially since on-demand is always more expensive per unit of compute than buying outright.

There are circumstances in which public cloud platforms are less expensive than colocation. If you expect rapidly changing IT resource demand over short periods of time, it may make sense to deploy on-demand cloud servers at times of peak demand and scale back later. However, most companies don’t require extreme elasticity for database, application, or service hosting.

Issue Resolution In The Cloud And Colocation

There’s no guarantee that a similar outage wouldn’t happen on colocated hardware, but if it did, mitigation would be under the control of the company that owns the hardware. With cloud hosted infrastructure, there’s really nothing a user can do to resolve issues of this sort — they simply have to wait until the cloud provider lets them know it’s fixed.

Major outages are rare on any infrastructure platform, but it’s not rare for infrastructure users to experience performance and availability issues because of the way a platform is architected. Public cloud users often experience performance problems caused by contention for resources in the multi-tenant cloud environment. Storage Access Networks used by public cloud providers are particularly susceptible to performance issues.

If a company finds its virtual machines hosted on a physical machine with a neighbor that makes excessive resource demands, they can suffer performance degradations. Cloud users have limited options when it comes to resolving performance issues.

Colocation of owned and self-managed hardware doesn’t suffer from the same problems. Colocation servers and networks can be optimized for specific applications rather than for the general use-case. Colocation clients control exactly which hardware is deployed and how it’s used, allowing them to build networks and clusters ideally suited to their needs.

Every choice involves tradeoffs; there’s no such thing as a perfect IT infrastructure solution. Although I’ve argued that the majority of businesses seeking an alternative to on-prem data centers would benefit from colocation instead of cloud, there’s a place for both in the infrastructure portfolio of established businesses.

Cloud platforms are excellent for bursty workloads where demand is unpredictable. A common configuration uses colocated servers to host an application’s database and any services that benefit from the best possible I/O and performance — video encoding, number crunching, big data analytics, and so on. If, at times of high-demand, the application needs more web servers than the colocated hardware can accommodate, cloud servers can easily be spun up to absorb the increased load.

It’s not necessary to choose between colocation and cloud, because each has its place in the lineup of infrastructure solutions available to CIOs and IT professionals. Nevertheless, colocation offers a superior ROI in the great majority of use cases.